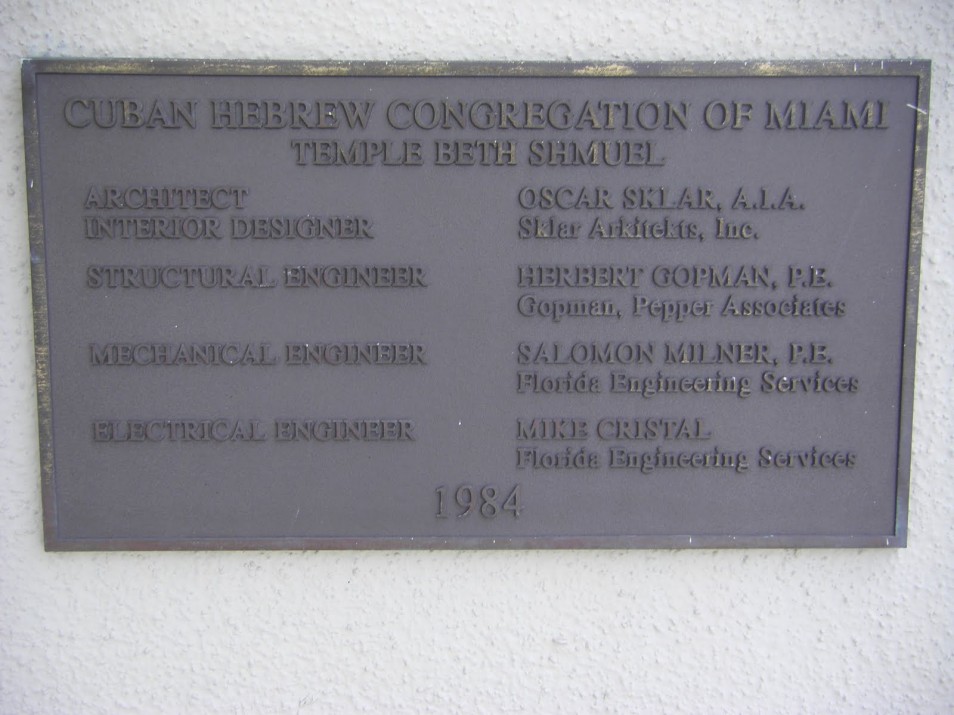 The following excerpts are from an article published on April 17, 2010, for 000875: Independent Architectural Theory on Blogspot:

"Temple Beth Shmuel includes a Montessori School (directly adjacent to the cool facade) and the Cuban Hebrew Congregation in the synagogue. It was built in 1981 by Jewish Cuban architect Oscar Sklar. (enough facts)."

"The temple's front windows are blobby; they are like lined up amebas or normal-shaped windows that decided to melt in place. Each one has dark stained glass. There are two front doors, I assume one to enter and the other to exit. These doors have overly rounded corners making them a cross between regular rectangle and an archway. These holes/apertures into the stucco facade remind me of Gaudi's stuff, but I don't see how anybody familiar with architecture wouldn't think this, at least for a second."

"I really like it; there is something homey about it that I can't quite put my finger on. The building, from what I could see, is pretty standard except for this entrance. It has a front where it acknowledges the street which is the only part I cared to examine. This facade catches my eye at street level and commanded my attention... even more so than the oversized Frank Gehry building being constructed a couple blocks down or the Hertzog and de Meuron parking garage along Lincoln. I didn't even realize the garage was the famous duo's building, and I didn't realize the huge one under construction was by FG until I ran into it on a blog online. This synagogue pulled me in without online critiques and words."

"This temple is Miami Beach."

The full blog post can be found using this link.