The Jewish State of Florida 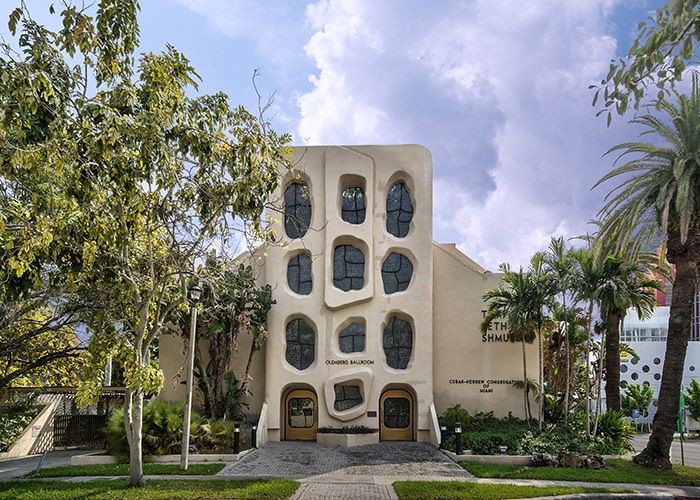 The following excerpts are from an article written by Sara Liss and published by Hadassah Magazine in February 2007:

"Florida has long been a haven for Latin Jews fleeing economic and political turmoil. The most prominent are the Cuban Jews, or 'Jewbans,' who began arriving in 1960 as part of the mass exodus of Cubans seeking political asylum after Fidel Castro's Communist takeover. According to historian Betty Heisler-Samuels, Jews had immigrated to Cuba from Eastern Europe in the 1920's and 1930's, when quotas to the United States were cut sharply. By 1959, they comprised a respectable percentage of Cuba's business community. Today, there are about 2,500 Cuban Jewish households in Miami-Dade County."

'I went on a trip to Israel, and the alleyways of Jerusalem felt like caves; I tried to incorporate that into the design,' said Sklar.

The sanctuary's mural, also designed by Sklar, is made of fused colored glass and illustrates the Jewish holidays, forming a narrative of the Jewish life cycle. The candelabras on either side of the bima were designed in collaboration with Mexican Jewish artist Naomi Siegman. Shaped like a human arm, the light fixtures are eight feet tall, symbolizing strength."

"Until the 1950's, most hotels and beach clubs were restricted to whites and gentiles; therefore, since Jews were unable to buy and develop properties above Fifth Street, the pocket below Fifth became an enclave of Jewish hotels and eateries."

The full article by Sara Liss can be found here.

More details on Temple Beth Shmuel can be found here.