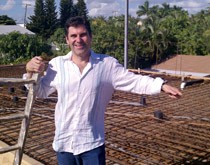 The following article was written by Lorelei Laird and published by Carnegie Mellon Today on April 2, 2012:

"It's 2007, and Ari Sklar is designing and building a four-bedroom home in a posh Miami Beach neighborhood where celebrities live in multimillion-dollar waterfront homes.

Like his father, Sklar is an architect. Also like his father, Sklar is interested in 'green' building. His father grew up in Cuba before Fidel Castro's era when buildings had to incorporate energy-efficient features because alternatives such as air conditioning weren't available. When Sklar studied architecture at Carnegie Mellon, earning his degree in 1989, he made a point to learn energy-efficiency ideas such as passive solar design.

Once the home in Miami Beach is completed, Sklar and his team hope to make a profit. What he and others couldn't have accounted for was the oncoming real estate crisis; it hits Florida especially hard and prompts Sklar to put his project on hold.

Last year, though, hammering could be heard again at 2020 Alton Road. The home, with a $2.19 million asking price, will be unique to the market because he has changed the design so that his energy-efficiency ideas can be put to good use. When finished this spring, the home will operate at 'net zero' for energy, which means it will produce 100% of its electricity from rooftop solar panels and a wind turbine. Other 'green' features include a geothermal climate-control system, rainwater collection, and a self-cleaning, chlorine-free pool.

The home has caught the attention of one of the city's commissioners, Michael Gongora, and also Mayor Matti Herrera Bower. It led to Sklar being recently honored at City Hall for his 'visionary efforts for building what is expected to be the first LEED platinum home in Miami Beach.'"

The full article can be found here.